Vanguard Self Storage East London is situated at 188 Westferry Road, Millwall, Isle of Dogs.  Below is a brief history of Millwall and Docklands.

Seven windmills for the grinding of corn were built on the western side of the Isle of Dogs between 1680 and 1720, giving the area its name, Millwall.  The position of these 7 windmills are shown by the red box on the antique map below. 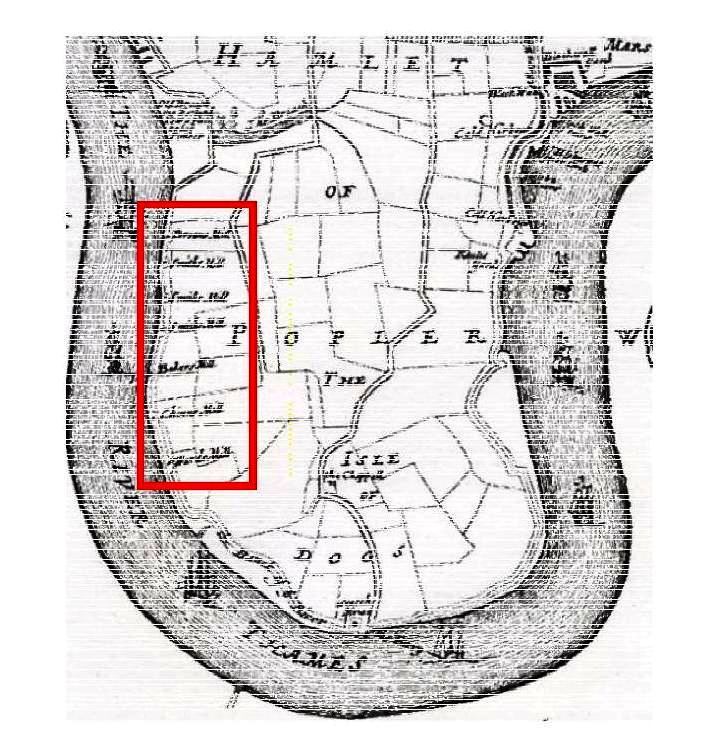 The ‘wall’ was a great bank of earth and stones and dated back as far as the Roman era and was definitely in use in the early Middle Ages. This bank of earth kept the River Thames from flooding the island at high tide, allowing the surrounding land to be cultivated as farmland.  The wall was certainly wide enough for seven windmills and for the path that ran its length.  This path stretched around the peninsula towards the area now known as Blackwall.

The windmills, some of which had been used for grinding corn, disappeared in the early nineteenth century when wind power was replaced by the power of the steam engine. In their place, new factories sprang up along the wall which was strengthened and straightened at the river’s edge to allow ships and barges to be unloaded.

The 17th and 18th Centuries saw an increase in ship-building at nearby Blackwall and Limehouse.

This ship-building was a mark of the growing prosperity of London as a port. By the end of the 18th century, there were so many ships coming into London that there was barely room for them to unload and load safely on the quays and wharves of the port near the Tower of London.

The West India merchants, whose sugar ships came crowding up the river all at the same time, petitioned Parliament for permission to build enclosed docks across the northern end of the Isle of Dogs. The West India Docks were built and they opened in 1802 and traces of their once grand open vistas of water still survive, overshadowed now by the skyscrapers of Canary Wharf. Some of the original sugar warehouses have been turned into the Museum of London Docklands.

In the years that followed the opening of the West India Docks, the western foreshore of the Island was developed with shipyards, barge builders, mast makers and iron works. http://www.museumoflondon.org.uk/museum-london-docklands

Skilled workers and labourers came to Millwall to live. Rows of cottages were built for them with very smart residences for the more affluent. There were new roads, shops, pubs and clubs.  The air resounded with the noise of industry and with the dialects from all parts of the United Kingdom.

The name “Millwall” became associated with the most advanced engineering of the day, leading to the construction of Brunel’s famous and ill-fated Great Eastern steamship, which was launched on 31st January 1858, the construction of which took place very close indeed to Vanguard’s site on Westferry Road.