What Have We Had on Our Roof Over the Years?

If you’ve ever been travelling along a particular stretch of the A40 in West London, you may have spotted a number of strange sights atop a brick building by the side of the road. Planes landing? Santa making his rounds? At Vanguard, we like to show off some interesting things on our roof and support good causes.

This month, we’re rounding up a list of all the wonderful things which have made eye-catching features for our West London branch building. 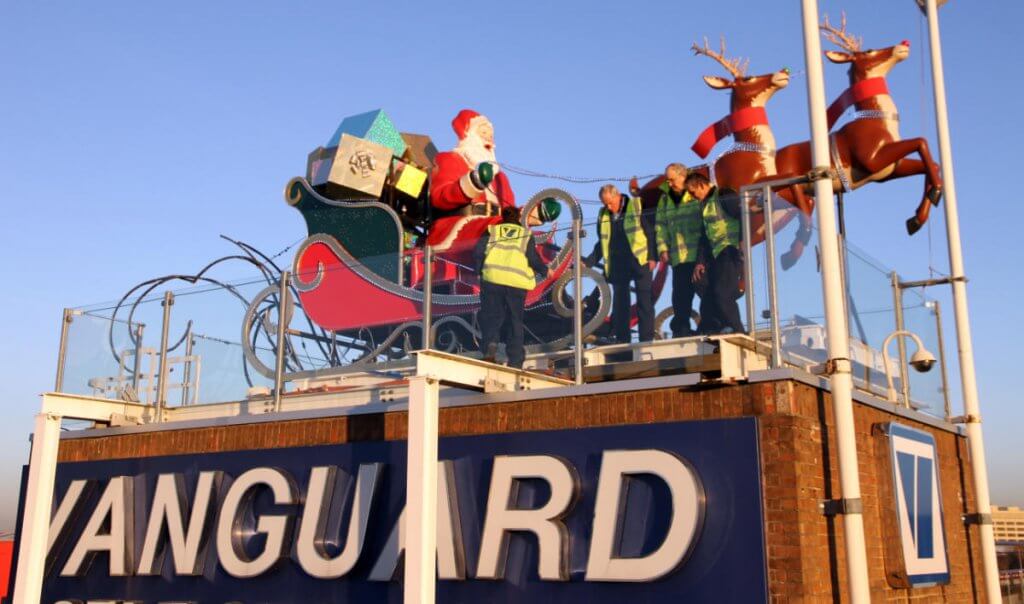 Famous for scaling rooftops in December, we’ve had visits from Santa Claus in a number of forms. We’ve had a giant inflatable Santa, as well as Santa in his sleigh with reindeers – we even had him stood on top of one of our planes. We like to think we bring a bit of festive cheer when Saint Nick comes to visit. 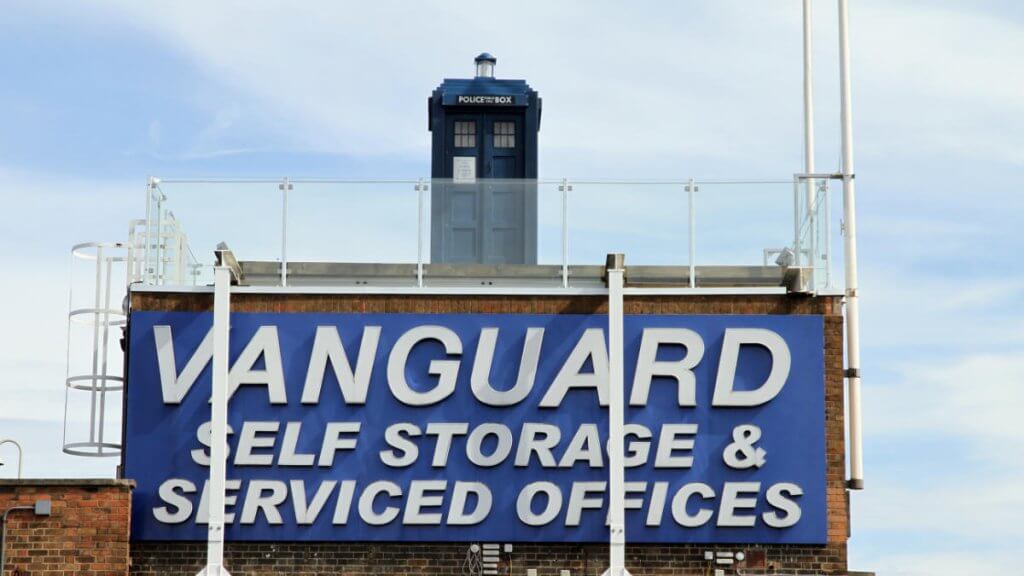 Famous for travelling through time and landing in far-off worlds, it was only a matter of time before the good Doctor made a pit stop on top of our building. One of our more popular features, this was a well-recognised vehicle on our roof, if a little more alternative than we’re used to. 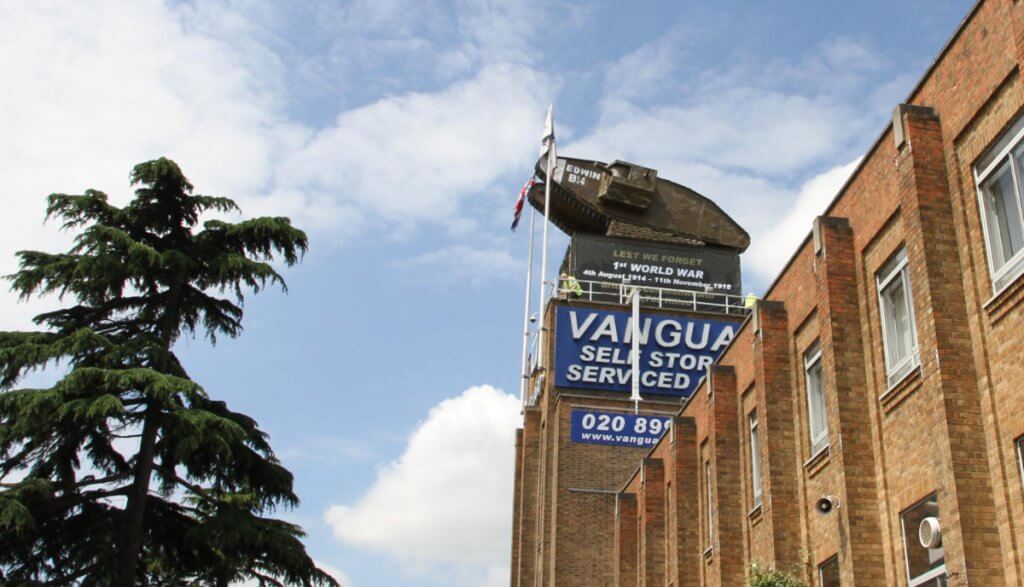 As part of our effort to mark the 70th anniversary of the D-Day Landings, we featured Edwin the Mark IV tank, which helped to turn the tide in the First World War. The tank was on display for several months having been made as a replica specially for our building. 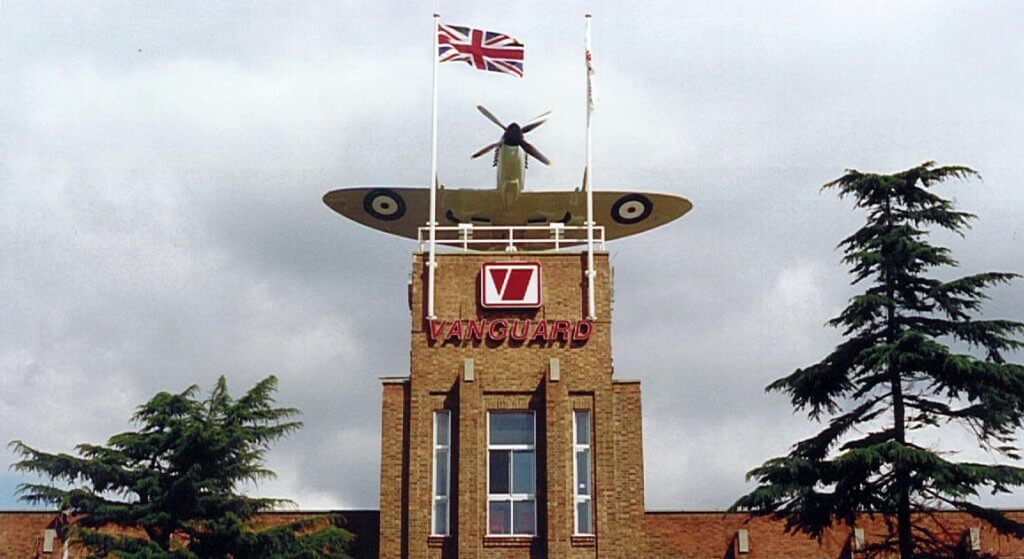 Possibly one of the most recognisable fighter planes used by the RAF and throughout World War II, we were honoured to display a Spitfire soaring on our rooftop at Vanguard. Military aircraft have been a speciality for us, as you might be able to tell from the next item on the list. 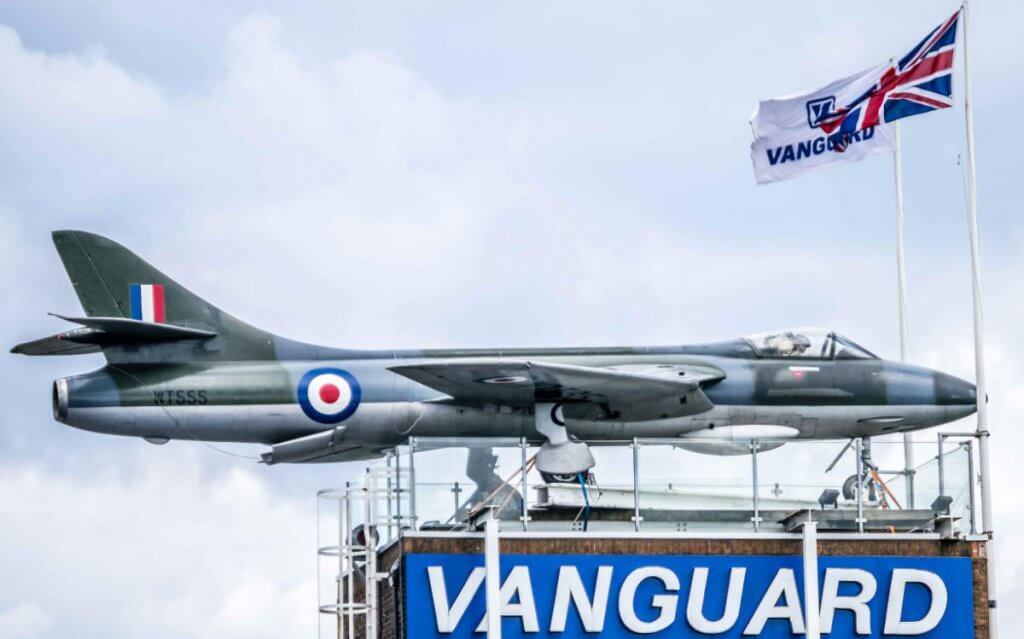 Another classic piece of British military engineering, the Hawker Hunter has featured on our roof more than once. The Hawker Hunter took to the skies in the 1950s and remained popular (in different guises) over the next 50 years. 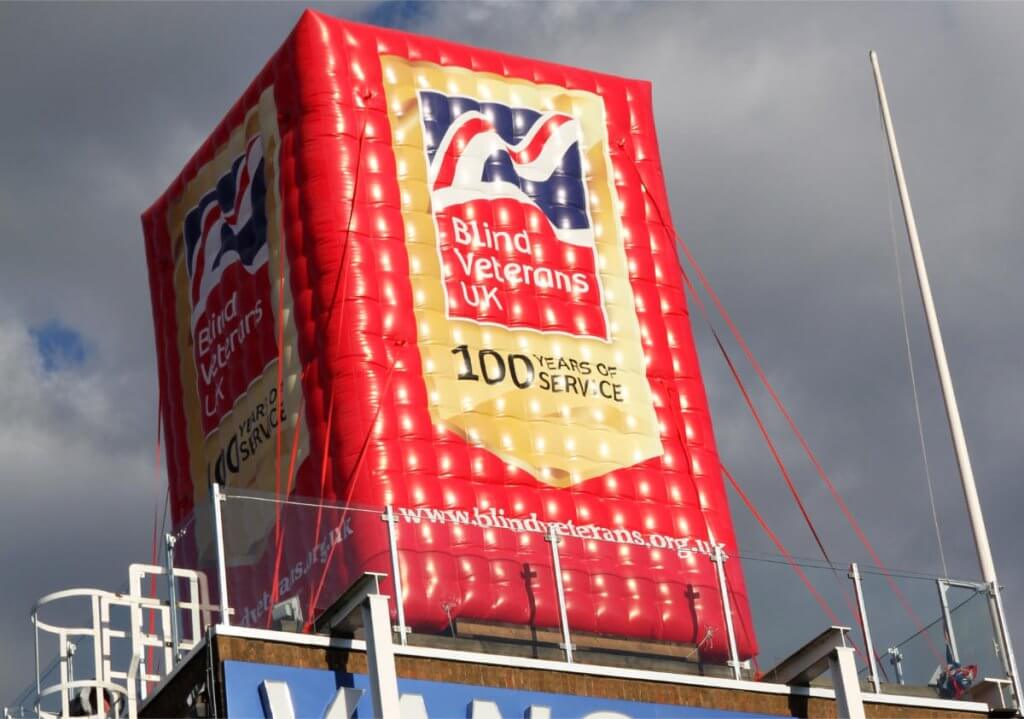 A really special day, close to our hearts, marked with a big red monument, we celebrated 100 years of service for the Blind Veterans charity. They do such great work for ex-servicemen and servicewomen, helping them rebuild their lives when they have lost their sight serving for our country. 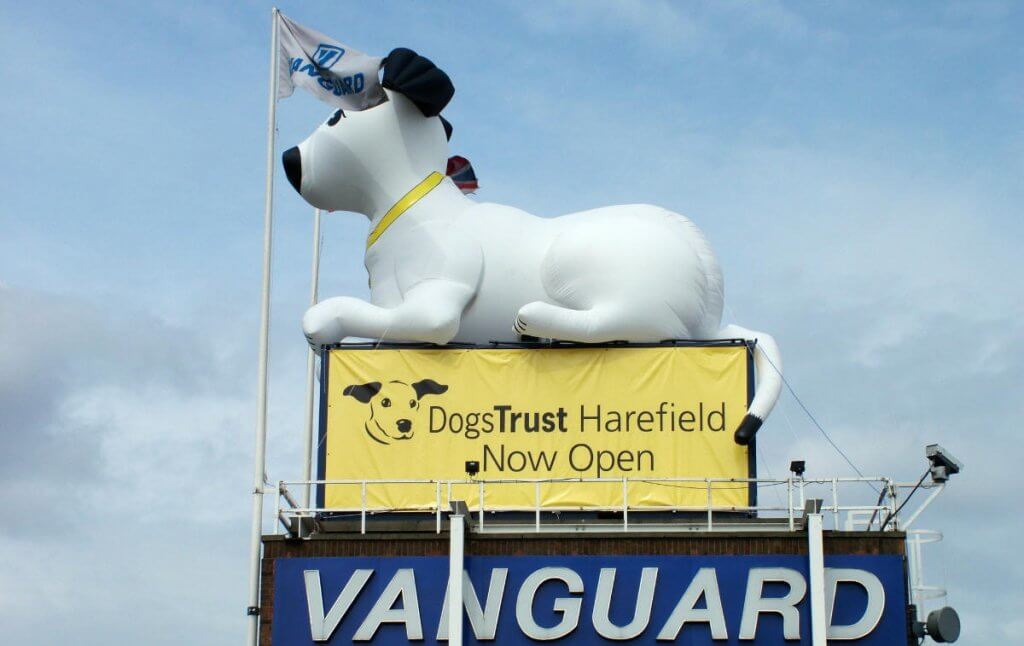 Another charity we’ve helped with our rooftop displays is Dogs Trust, who specialise in looking after the welfare of dogs. We had their mascot – in giant inflatable form on top of their yellow sign – on our roof when they opened their Harefield branch to help promote the charity which can be found a little further up the road and off the A40.

That’s quite an array of features for our rooftop, but it doesn’t stop there – the list is long and has included other features such as: 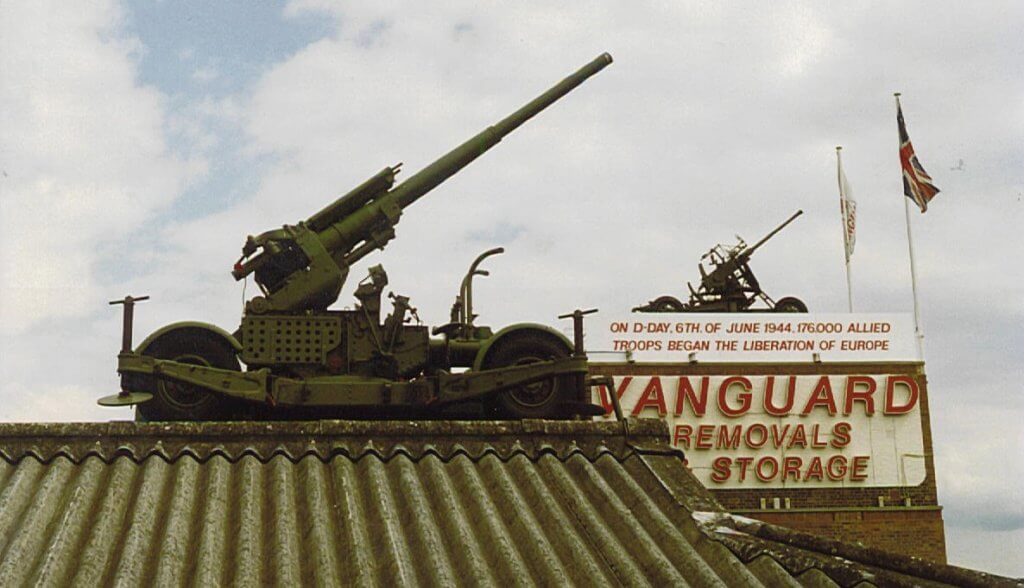 Plus, at our self-storage branch in Bristol, you can also find another plane hanging from our ceiling – the English Electric Lightning – which you can read more about here. 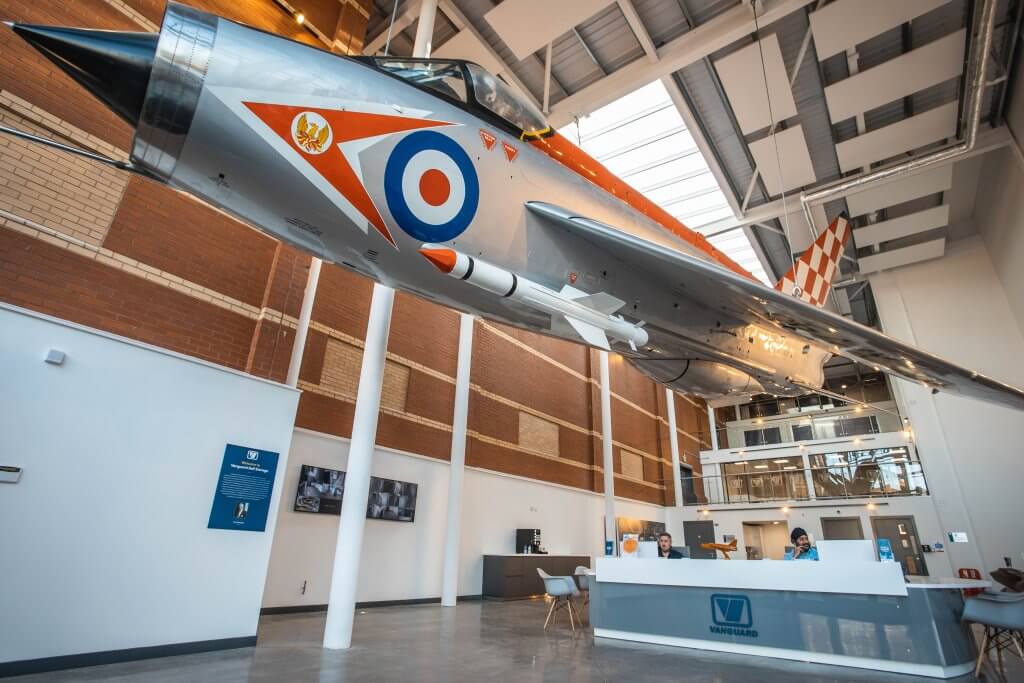 If you’re looking for self-storage in London, Manchester or Bristol, look no further than Vanguard. We have decades of experience as a family-run business, helping you to store your valuables, belongings and even helping your business. Call us today to find out more about the storage options our sites have for you.