The Storage Company of Choice For a Record-Breaking Polar Adventurer

Vanguard is proud to be the storage company of choice for author, public speaker and polar adventurer, Alex Hibbert. Alex has chosen to use our storage services in the lead up to his next highly anticipated expedition, The Dark Ice Project.

Who is Alex Hibbert?

Alex Hibbert currently holds the world record as the polar traveller who has skied furthest on an unsupported Arctic journey. His trip lasted an astonishing 113 days and covered 1374 miles with no resupplies or physical support.

This is just a small glimpse into Alex’s world. Since 2006, Alex has led numerous independent projects across the polar regions, including a 330-mile journey across a polar icecap in just 12 days.

Alex has documented his adventures through a series of books. His latest, Polar Eskimo, details his life-changing experience in the beautiful region of Avanerriaq, where Alex lived among Polar Eskimos for six months.

Alex is also a prolific public speaker. Standing among esteemed clients, Alex shares the stories of his adventures and the invaluable lessons he learned along the way.

What is The Dark Ice Project? 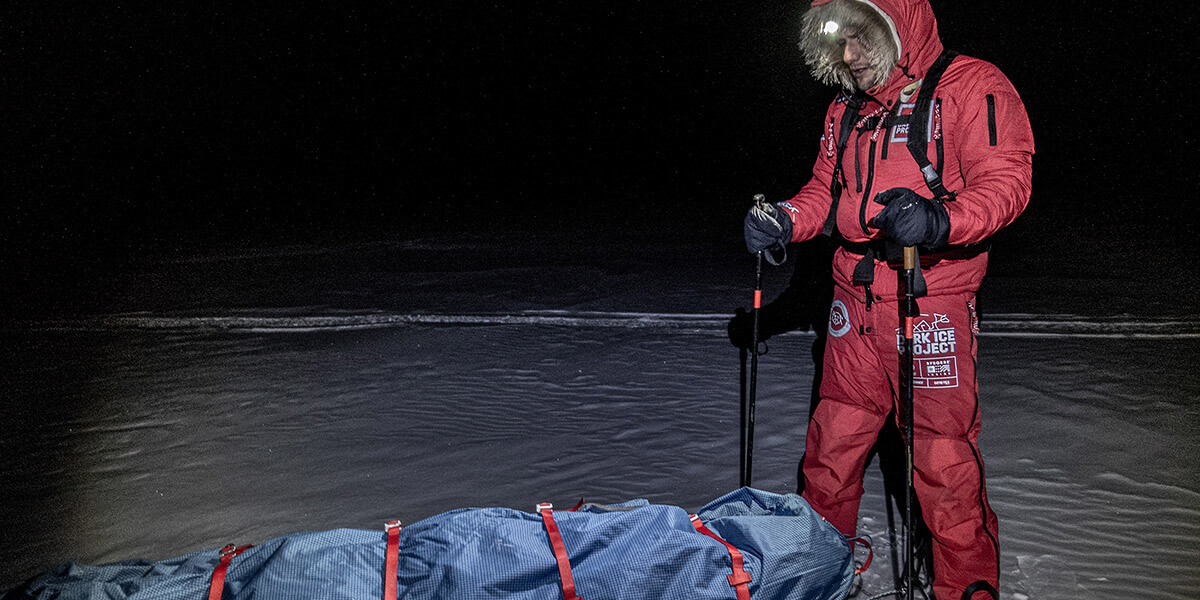 The Dark Ice Project is Hibbert’s most ambitious challenge yet. He and two other seasoned polar travellers will embark on a 6-month-long journey from the northern coast of Alaska at the close of the High Arctic summer towards the edge of the Arctic ice pack.

In a modified lifeboat.

The Dark Ice Project will mark the first-ever winter expedition of its kind to the Arctic Ocean. In addition to exploring new territory, the expeditionists seek to find key data that will aid groundbreaking research in environmental science.

Unfortunately, due to unforeseen circumstances, The Dark Ice Project has been postponed until further notice. During this period of uncertainty, Alex has chosen to store the equipment for his expedition at the London Victoria branch of Vanguard Self Storage.

We’re proud to be Alex’s storage operators of choice for the Dark Ice Project, and we recently caught up with him to find out a little bit more about the project and his decision to use our storage facilities.

An interview with Alex Hibbert 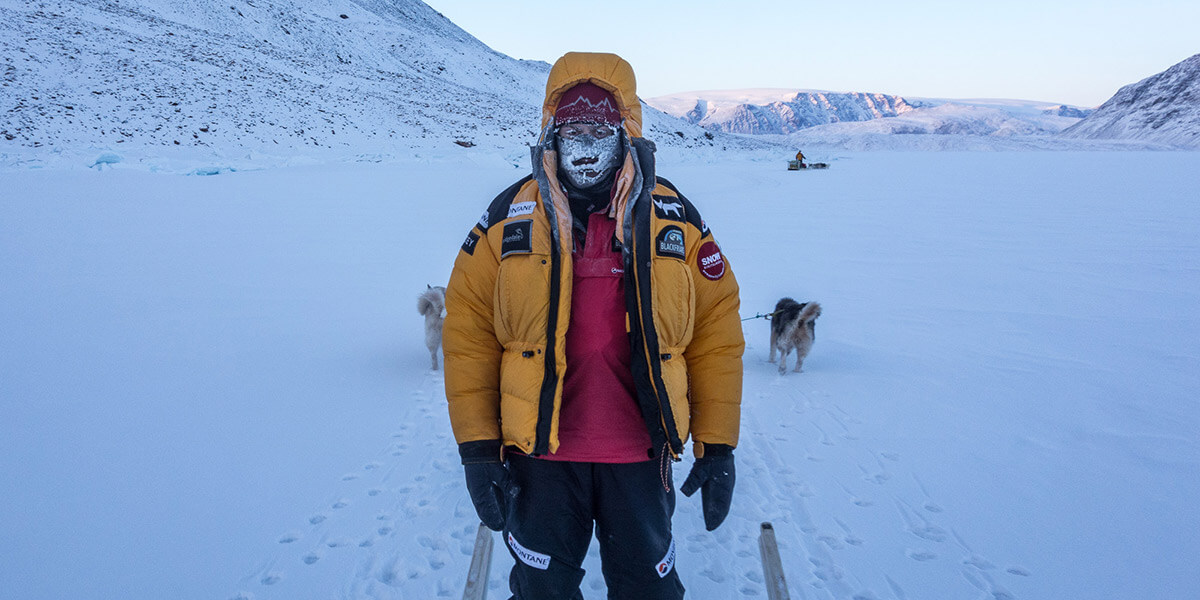 The Dark Ice Project is a hugely exciting expedition but has not been without its setbacks. When can you expect to restart the expedition?

Yes, it was galling to be ready and practically packed to begin a giant expedition, and thinking there was a clear legal route via which to do so, but then having it halted suddenly. Obviously, in perspective, there are far worse things people have to deal with, but that doesn’t make the ‘waste’ of thousands of hours of work any easier to rationalise and get past. But, get past I must. A replacement plan for this winter was also made impossible at the last moment, but I was already mentally prepared for this. But, I’ll be on the ice this coming winter, whether for the DIP or an interim journey.

Can you tell us a little about what you hope to achieve on this expedition?

The DIP is, at its core, an expedition to reach the North Pole via a new route in the full darkness of polar winter – and doing so without resupply. The 2020 launch also included a multi-month boat-borne science survey before the main ski phase.

Why are you choosing to venture into the darkness on this expedition? What about it appeals to you most?

I think initially it’s because I wanted to add to the demands made by an expedition. Something difficult in the light is vastly harder in the dark. I want to contribute to and innovate modern polar travel, and so taking on a very unusual winter expedition was in my mind a good avenue to forge.

The planning for this project must have been immense. How long have you been planning this trip and how important is the planning process for an expedition of this magnitude?

The DIP has had a couple of manifestations. I first came up with the broad concept in 2012 and attempted a ‘fact finder’ expedition that winter. With a four-person team, I made a try for a route from NW Greenland, but ice conditions were impossible, and so the team and I re-developed our expedition entirely, so-as to make the best of the bad luck. I then developed the Canada/Alaska route from 2017-present, and only last year had we raised enough funds to launch properly, without corners being cut. Planning and development is so integral that it’s hard to even see it as an important separate entity – it’s an all-consuming facet of the whole process. 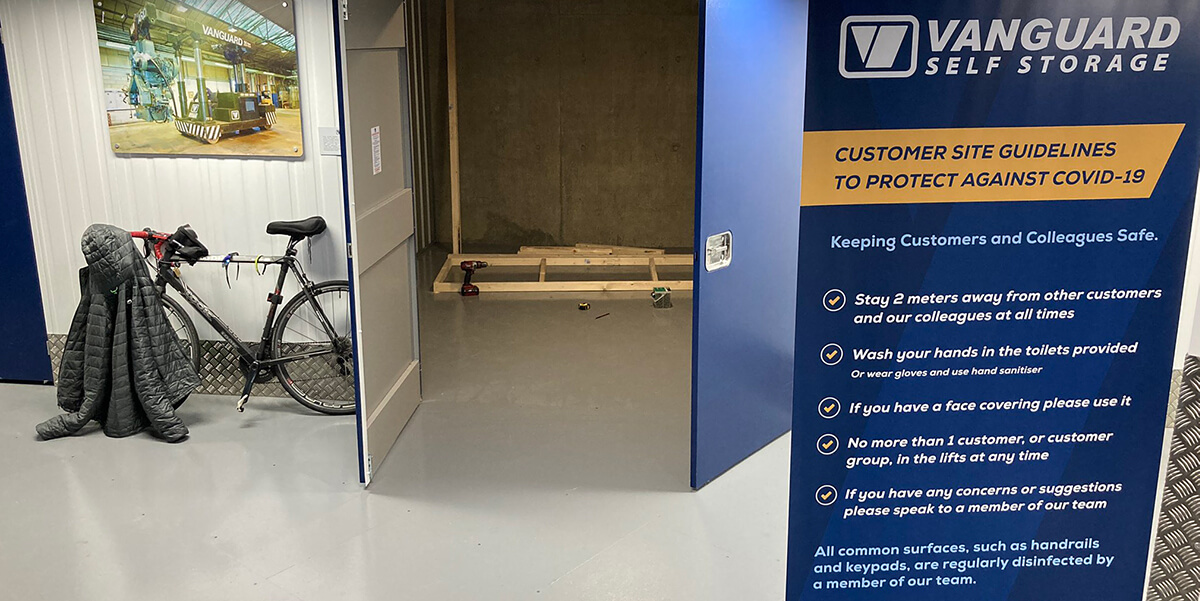 And you’ve chosen to use Vanguard Self Storage to store your equipment. How have you set up the storage unit to accommodate all of your items?

I find that even in a large unit you have to be methodical in order to make the best of warehouse space. I have a serious quantity of equipment and supplies, and so I’ve found it important not just to think about floor area, but also the vertical plane. I have nearly a dozen shelving units with narrow walkways on all sides, so I don’t end up having a vital item stuck at the back behind tons of gear. I’ve also constructed two large wooden racks all the way to the ceiling (from cheap CLS timber) to make the best of my unit dimensions. This helps me store expedition sledges and lighter items above head height.

How have you found the level of service at Vanguard? Has it met or surpassed your expectations?

The paperwork side of things was clear and brief, so not like diving into a vat of forms and small print! The staff both at head office and the Victoria storage facility have been extremely flexible and attentive. In fact, we get on so well that sometimes whilst I’m working in my area a member of staff might come over for a chat whilst on their lunch hour. It’s clear that the team there aren’t just counting down the minutes until they leave, but actually take pride in their work.

Can you tell us an interesting story about a piece of equipment currently stored at Vanguard?

I have a single ski, called Rodney. I haven’t used him in a decade, and his brother Delboy ended up down a crevasse in 2011. He was used on my first huge expedition, The Long Haul, and snapped in half at around the 1000-mile mark. My team-mate and I strapped him back together again and he survived the final 400 miles.

What made you choose Vanguard Self Storage?

I’ve used various other storage and warehouse companies over the years, and like many have found problems like price-hikes, inflexible policies, and high air humidity can sour the experience a great deal, quite unnecessarily. It’s normally due to an impersonal, corporate attitude. At Vanguard it couldn’t be more different – a premium location and facilities with staff you feel that you can openly discuss and negotiate with. 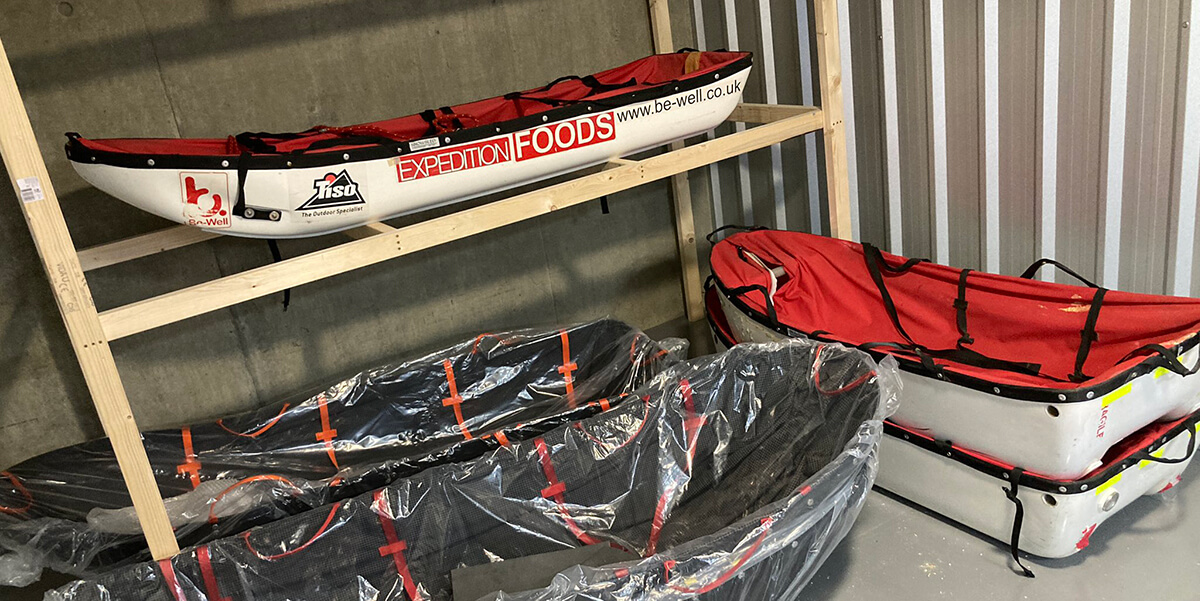 We’d like to thank Alex Hibbert for the interview and look forward to hearing about his success on the Dark Ice Project when the project restarts.

While we appreciate Alex’s appetite for bold and risky adventure, Vanguard is equally happy to offer the complete opposite: safety and stability for your possessions. With 55 years of experience in the storage industry, we know what it takes to keep your items safe. All of our branches have a range of security features, including 24/7 surveillance and a comprehensive alarm system. Rent a unit and you’ll be the sole owner of your lock and key, plus you’ll be given a unique pin code to let you in and out of the building. So whether you need a 150sqft unit to store your expedition equipment or a 10ft locker for a few personal items, Vanguard Storage Services are here to help.